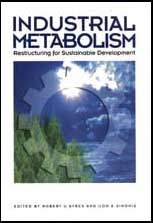 Yet, there are other perspectives and other modes of analysis. The earth system can be viewed as a whole. The anthroposphere can be viewed as part of the planetary system. Industry can be examined within this larger context, not as a collection of individual firms, plants, and processes. Further, some powerful analytical tools remain at our disposal. The law of conservation of mass and energy (the "first law" of thermodynamics) is one of them. In our context this law of physics gives rise to the materials balance principle. One implication of this principle is that materials extracted from the natural environment for the production of goods and services must eventually be returned to the environment in degraded form.² So simple a principle, and yet with such profound implications.