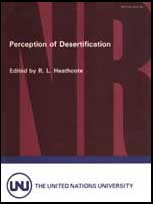 1. The context of studies into the perception of desertification

This first chapter provides the context for these studies within the broad research activity in environmental perception, and the final chapter attempts a general summary of the findings from the four studies and suggests specific lessons which might be borne in mind by decisionmakers attempting to mitigate the impact of desertification in the study areas as well as lessons which have a more general relevance.

Since the mid-1960s the so-called "behavioural revolution" in geography has produced studies focused upon the ways in which information about the environment is acquired, interpreted, and used in human decision-making. Two broad avenues of enquiry appear to have opened up as a result of this revolution. One, carrying on from the prior quantitative revolution, has led to studies of human spatial behaviour and attempted explanations of the patterns by models and theories derived from physics and mathematics (Abler, Adams, and Gould 1971; Chorley and Haggett 1967). The other avenue has led to studies of human perception of the environment, seeing in expressed attitudes, knowledge, and motives the keys to the understanding of human activity in the environment (Brookfield 1969; Saarinen 1974). The search for relevant data crossed into the field of psychology and met psychologists emerging from their laboratories to tackle the more complex environments of the "real" world outside. The result has been studies of sensory stimuli on a new and broader scale-studies in fact of environmental psychology (Craik 1970; Ittelsoneta. 1974).

The complex of research resulting from this inter. disciplinary effort has provided three themes which appear to be particularly relevant to the perception of desertification. First is the concern for the historical and sociological context of the perceptions. The management of resources has been shown to have a long and varied history, one in which the contemporary "climates of opinion," philosophies, and cultural viewpoints have played significant roles (Buttimer 1974; Glacken 1967; Tuan 1974). The second theme has been the recognition of the role of images in the decision-making process. Decisions appear to be made in response in part to an "image" of the environment which may differ appreciably between decision-makers and from the "reality" as interpreted by others (Downs and Stea 1973; Lynch 1960). Such images have been shown to be relevant to the understanding of environmental management and planning (Saarinen 1976).

The third theme has been a concern for human perception of, and adjustment to, natural hazards. Here, a considerable body of empirical and theoretical data has been accumulating over the last 20 years and is currently being consolidated in various publications (White 1974; Burton, Kates, and White 1978; Burton and Whyte [in press] ). These studies are particularly relevant to the problem of desertification since they have shown that the natural hazards exist at the interface between the natural event system (rainfall data, wind speed, river level, etc.} and human activity (agriculture, buildings, canal systems, etc.). Further, they have demonstrated that the impact of the hazard and the human adjustments to it depend in part upon the perception of the hazard by the people at risk. All the evidence from the studies of desertification so far published seems to indicate that the phenomena of desertif ication reflect a very similar interface between natural events and human activity. Therefore the hypotheses, techniques, and even some of the findings from the natural hazards studies may be directly relevant to any attempt to understand human appraisal of and reaction to desertification.

The Problem Defined: The Role of Environmental Perception in the Desertification Process

In the context of these prior studies and with particular reference to the three themes noted above, the four case studies reported here were designed to try to establish the role of environmental perception in the desertification process. The studies posed three basic questions:

1 ) What are the perceptions of desertification, do they vary, and if so, how and why?

2) Do the perceptions of desertification affect reactions to it, and if so, how and why?

3) Does an understanding of the perception of desertification provide any lessons for the mitigation of the deleterious effects of the process?

These three questions should be borne in mind during consideration of the following chapters. The concluding chapter will attempt to provide some general answers.

The four studies had common aims-the three basic questions noted above - and a common general methodology. This methodology incorporated both structured" and unstructured field interviews with a wide range of resource managers (from primary managers- farmers and graziers-to researchers and bureaucrats); documentation of desertification from official statistics, air photographs, and field evidence; and archival study of past production and land-settlement trends. The emphasis on these methods and sources varied in content from study to study due to time constraints and to the availability and relevance of the data. The intention throughout, however, was to obtain a wide spectrum of data both to provide a balanced overview and to avoid some of the problems and criticisms of the original nature hazards research voiced in Downs 1970, Waddell 1977, an White 1974 (180-184).

As defined by Dregne desertification implies: "impoverish ment of arid, semi-arid and some subhumid ecosystems by the combined impact of man's activities and drought" (Dregne 1977, 324). Thus a process of interaction bet ween a natural event system (drought) and a human activity system (resource use) which creates resources can also create a hazard-an environmental stress situation-e.g., desertification (Fig. 1.1). Most studies of desertification have concerned themselves sooner or later with soil erosion seeing this as an index of the relationships between climate water balances, and biotic forms on one side and human land use systems on the other. In three of the following studies the main emphasis is upon the perception of soil erosion as a surrogate for the broader impact of desertifica; tion; in the fourth study the emphasis is upon perception of surface water salinity -another aspect of the desertification process. Three of the studies were concerned with the developed world (Australia and the USA), while the fourth was set in the developing world (Sri Lanka). Each study therefore has a specific aim and spatial-temporal context. Together they may offer evidence of the significance of environmental perception in the desertification process and some ideas on how that perception may be used to mitigate desertification.

FIG.1.1. Model of the Interaction between Natural Events and Human Activity Note The location of the desertification process is indicated.