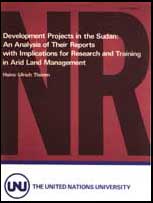 A number of projects in arid and semi-arid land regions of the Democratic Republic of the Sudan have been plagued by serious problems. They are partly due to natural factors which people cannot change easily. Others are composed of socioeconomic aspects describing the interaction of man with his environment. Some of them need long time periods for improvement; some others can be controlled if project performance could be lifted to internationally accepted standards. The major findings of this study can be summarized as follows.

1)Arid land management is a combined approach of the local population together with administrators and scientists to stabilize a land-use system suitable to allow permanence of cultivation, protection of natural resources, and viability of the economic activities involved. The analysis of selected projects reveals major shortcomings of the instruments used to reach these goals. Research and training programmes will have to be introduced to remove at least some of the obstacles.

2)Mechanized rain-fed farming projects suffer mainly from irregular yields and vast difficulties of input supply and output marketing. Project structure and administrative procedures are not flexible enough to react to changing climatic and economic conditions. They carry a large risk of failure for the individual farmer. These projects occupy a large share of capital goods imports (machinery, fuel, etc.). They represent the most serious threats to the environment of all the farming activities in the Sudan. Desert encroachment is a real danger in some areas.

3)Irrigation projects have. in general, demonstrated an acceptable concept of tapping a regional potential of land and water resources. The investment of large sums of capital has been justified mainly by the capacity to earn foreign exchange and to settle and employ large numbers of people. The organizational solutions and the quality of the staff has not always matched the magnitude of the projected task. Problems of crop rotation, optimal water distribution, weed infestation, labour shortage, etc. could not be solved. Participation of the local population remained a problem.

4)Grazing schemes on pastoral land received a mixed rating of interest by the local population. Whenever major land ownership disputes or tax collecting problems were involved. projects disappeared after an initial period of trial and error. Over-grazing as a consequence of the unchanged principle of common ownership of land and individual possession of livestock remained a problem. Substantial settlement of nomads did not materialize. Improved livestock marketing facilities are still needed to raise the incomes of pastoral tribes.

5)Research requirements are deduced from apparent common problem areas of arid land projects. They include questions about the determining factors for the permanence of cropping patterns or the grazing use of pastures. for optimum land-use systems under given natural, economic and human restrictions, for social acceptance, and for the economic viability of projects in arid land regions. Strengthened local research institutions, supported by international co-operation, can be major information sources.

6)Training needs for project staff are evident. They should be met through a post-graduate programme at an African university leading to a M.Sc. degree in Arid Land Management. A total programme period of 18 months would be composed of ten months of course work, four months of practical training on a project. and four months of thesis work. The course work should be based upon the identification of bottlenecks in project performance and may devote one half of the available time to the permanence of cultivation (environment,water, crops, livestock) and the other half to project organization, social acceptance, and economic viability.