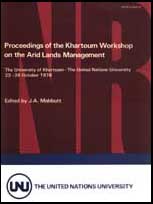 At a conference held in Zaria, Nigeria, in 1966 Professor H. S. Darling, Director of the Institute for Agricultural Research at Samaru in northern Nigeria, expressed the view that the scientific solutions to agricultural crop production in northern Nigeria were either known or about to be known, that sufficient was known about economic factors involved to render this problem of rural development solvable, but that the sociocultural problem of getting the scientific solution accepted had hardly been even formulated (Sjo et al, 1967). Similar views have been expressed over the years by other authors such as Chambers (1974) in relation to East Africa. De Wilde (1967) writes, "Successful development of agriculture often requires an intimate understanding of the society within which it is to take place-of its systems of values and its customary restrains," as well as an understanding of the environmental and economic forces involved.

The Sudan has had a good record in rural development projects in the past. Nevertheless, fears have been expressed in recent years concerning the future of the Gezira Scheme (Barrett, 1977), the development of Khashm el-Girba (Dafalla, 1975) and crop yields in areas of soil exhaustion in the Gedaref Mechanical Crop Production Scheme (Shakkak, 1977).

Both the United Nations University Arid Lands Sub-programme and the proposed Joint Research Project between University College, Swansea, and the University of Khartoum owe their origin to the above situation and to the belief that the problems of rural development and rural changes are nowhere more urgent than in the arid and semiarid lands of sub-Saharan Africa, which have recently experienced a series of drier years than people had come to expect, resulting in loss of livelihood, disruption of national economies, and human misery. The UNU Arid Lands Subprogramme is concerned initially with assessing how known solutions to environmental problems have failed to be applied under specific conditions in arid and semi-arid areas. To this end it has commissioned a study into the success or failure of development projects in the Sudan. As indicated below, the Swansea/Khartoum Joint Research Project is concerned with this problem too. Its basic presupposition is that any successful rural development, especially in the arid zone, requires careful attention to environmental, economic, socio-cultural, and organizational difficulties. The project leaders feel that the most difficult problems are to be found in the socio-cultural sector: if people cannot identify positively with proposed changes the chances of their eventual success will be considerably reduced.

The Swansea/Khartoum Joint Research Project is a logical element in the UNU Sub-programme in that it proposes to investigate the interaction of relevant factors in rural development in a specific area within the arid and semi-arid Sudan, and it also falls within the area designated as a priority region by the Sudanese Government within its Desert Encroachment Control and Rehabilitation Programme (DECARP).

Furthermore, it is considered that the approach which we are undertaking should form a necessary part of the procedure for the training of Sudanese or other officials concerned with facilitating the transfer of known techniques and solutions to arid land problems. It is only through a proper understanding of the interaction of environmental, economic, socio-cultural, and organizational factors that rational and practicable solutions to problems can be introduced.

In addition, this research could form a pilot study for the possible development of out-stations, including the determination of their functions and field of operations.

On the basis of interests in the two departments and urgent current problems in the Sudan, it was decided to investigate aspects of rural conditions in an area west of the Nile along the southern edge of the Sahara, within the area designated for priority research under the Sudan's DECARP Scheme.

The project area chosen lies to the west of the main Nile and White Nile between Shendi and el-Dueim, stretching westwards towards the Wadi cl-Milk. This area was chosen for the following reasons:
(a) it has been seriously affected by desertification;
(b) it is a manageable and reasonably accessible area for a relatively small team, but could be expanded if desired;
(c) it has received little detailed attention in the past; and
(d) it exhibits a wide range of differing ways of life:
-nomadic pastoralism;
-land rotation under rain-fed agriculture;
-irrigated agriculture, both modern and traditional;
-a number of market towns including some oasis centres; and
-commercial gum and groundnut production.

Aims of the project

The primary aims of the project in relation to the project area may be summed up as follows:
(a) to ascertain the existing situation;
(b) to ascertain the changes that have taken place during the past 20 years; and
(c) to make recommendations for remedial action. it is our belief that successful rural development requires attention to:
-environmental conditions;
-economic conditions;
-the socio-cultural traditions of the society; and
-administration and organization.

The project attempts first of all to make a study of these aspects within the area drawn from a range of disciplines. The study will also include an investigation of
-geological formations, landforms, soils and vegetation;
-climatology, stream flow and water-supply;
-agricultural patterns, landuse, and forest products, including gum production;
-population, population structure, population change,
-nomadism, and migration;
-transport and marketing;
-socio-economic aspects of urban and village life and struc sure; and
-formal and informal organizations and perception with special reference to local attitudes to rural changes.

Inevitably this will also involve the use of aerial photographs and satellite imagery, and a survey of research already carried out in the area, in analogous areas in the Sudan, and elsewhere. It is intended that these studies will be carried out at more than one level and that the general survey will be reinforced by case studies.

On the basis of our work it is hoped to define the basic principles for action. Our experience so far indicates that a successful rural development project requires:

(a) adequate in-depth research;
(b) adjustment of the proposed development to meet the most deeply felt needs and aspirations of the people affected so as to enable them to identify positively with the changes proposed;
(c) a sympathetic and understanding relationship of mutual respect between the project organizations and the people affected;
(d) an acceptance of the fact that instantaneous success cannot be achieved and that change must "hasten slowly" (failures not only waste resources, they also sap confidence); and
(e) an acceptance that there is no detailed blueprint for success.

The project will not start officially until December 1978. However, some work connected with the project has been completed or is in progress:

Some of the interesting conclusions of the completed research so far are:

(a) Success in the eyes of the people may be different from that proposed by the planners. The Gummuiya Scheme was planned to produce vegetables and fruit for Khartoum. In practice it has become a large sorghum field, and the people view the scheme favourably because it has secured crops by providing irrigation water.

(b) It was assumed that cultivators would be interested primarily in growing a crop that would give them the most money. Our survey shows that though money is importent it is certainly not the primary need as seen by the scheme cultivators. Their priorities may be listed in order of:

In a region subject to periodic crop failures in the past, with an animals-owning tradition and where life is difficult, this list of priorities is hardly surprising. Irrigated sorghum provides all these with the minimum of disruption to existing ways. It is a crop with which they can identify; it provides the staple food; it can be used for animal feed; it requires relatively little work and its cultivation is known already; and it can be sold in Omdurman or Jebel Aulia either as grain or cut green.

(c) Even within 30 km of the capital city a crop production system suitable for the local environment and attuned to local economic demands is not a sufficient base to guarantee success in terms of the original aims.
(d) The establishment of trust and sympathy between the planners, scheme administrators and the cultivators is a prerequisite for success.
(e) The need for local involvement and genuine consultation was made manifest.
(f) The essential conclusion to be drawn is not that the planners were wrong or that the people are stupid. Merely that at this point in time, the original proposal appears not to have been the best scheme for southern Gummoiya, but it could very well have been suitable for some other parts of Khartoum Province.

This means that the Swansea Geography Department's role in this research project must be on the following lines:

(a) provision of specialist facilities not otherwise easily available-e.g., aerial photographic interpretation facilities, cartographic assistance, computer facilities, printing, etc;
(b) experience and expertise in fields and disciplines which are at present weak in the Sudan, e.g., soil investigations, social surveys, etc.;
(c) experience and expertise in rural field studies acquired from other parts of Africa (east, west, and southern Africa), as well as from Europe; and (d) provision of suitably qualified manpower for case studies or fieldwork to support the manpower available locally in the Sudan; this would include particularly post-graduate research studies.

For such a joint research project as this to be successful, not only must both parties be committed to it, but the programme must also be flexible. It must be organized in such a way that failure to complete one portion of the programme does not invalidate the rest. The intention, therefore, is that it should end with a series of maps and reports which can stand by themselves, and form a coherent whole when put together.

It is hoped that this Swansea/Khartoum Joint Research Project can be fitted into the UNU Arid Lands Sub-programme in the Sudan, and into the work scheme envisaged for the University of Khartoum's new Institute of Environmental Studies.

Barnett, A. 1977. The Gezira Scheme: An Illusion of Development. London: Cass.

Shakkak, K.l. 1977. Mechanisation of Agriculture in the Clay Plains of the Sudan, with Special Reference to the Gadaref District.M.A. thesis. University of Khartoum.

Sjo, J., B.J. Buntjer, H,R.J. Davies, and D. Norman. 1967. Proceedings of a Seminar on Methods and Problems of Data Collection and Use for Rural Economic and Social Research. Samaru Miscellaneous Paper No. 16.