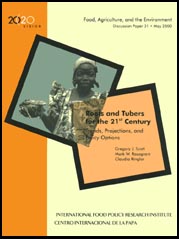 2. Trends in the Use of Roots and Tubers

Utilization of R&T in developing countries continued to expand and diversify during the last two decades. But both the growth in use and increase in the number and relative importance of particular end-use categories (food, feed, processed food products, industrial inputs) evolved in a highly uneven fashion across crops and geographic regions. This evolution reflects a series of structural changes in consumption and use of these commodities that began in some instances several decades earlier. Five structural changes bear mentioning: (1) the continuous surge in potato demand, particularly in Asia, beginning in the early 1960s (Scott 1983a; FAO 1995b); (2) the shift in use of cassava from food for domestic consumption to feed for export beginning in the late 1960s in Thailand (Konjing 1989) and occurring more recently (mid-1980s) for feed in Colombia; (3) the shift in use of sweetpotato from food to feed in China in the 1960s (Scott 1992); (4) the surge in yam consumption in West Africa in the late 1970s (FAO 1998a); and (5) the growing importance of cassava as a source of cash income and, hence, growing demand for cassava roots and processed products as purchased food in Sub-Saharan Africa since the late 1970s and early 1980s (Nweke 1992). Growth in total food and feed use was strongest for cassava and potato. Uses of cassava and sweetpotato continued to diversify into feed and processed products, particularly in Asia and to a lesser extent Latin America. The absolute increase in the consumption of R&T as food was highest in Sub-Saharan Africa. In light of these divergent tendencies, trends in R&T use merit a disaggregated analysis.

Growth of cassava as food has been particularly rapid in Sub-Saharan Africa, at 3.1 percent per year. The region has experienced low or negative economic growth and booming populations, and has continued to rely on R&T as major contributors to food consumption. Cassava (62 percent) and yam (33 percent) accounted for nearly all of the total increase in human consumption of R&T in Sub-Saharan Africa; the increase for potato was negligible and that for sweetpotato modest in absolute terms (Table 3).

As can be seen in Table 4, aggregate per capita consumption of R&T as food has remained virtually constant over the last decade and a half. In developing countries, consumption fell slightly from 60 kg per capita in 1983 to 57 kg per capita in 1996. In developed countries, per capita consumption declined from 77 kg to 76 kg. In spite of this apparent stagnation, the evolution of R&T use in developing countries has been quite dynamic. It has varied considerably across commodities by form (that is, particular food, feed, processed product, and seed forms); by end use; and by geographic region. Policy-oriented analyses and comparisons with other agricultural commodities therefore necessitate a disaggregated assessment of R&T use.

On a regional basis, Sub-Saharan Africa achieved both the highest level and the sharpest absolute rise in per capita food consumption of R&T between 1983 (140 kg) and 1996 (162 kg) (Table 4, Figure 3). In 1996 the region consumed almost three times the developing-country average. The increase in Sub-Saharan African per capita consumption is particularly remarkable given the region's high population growth rate (nearly 3 percent per year) during the same period. Per capita consumption as food has also been increasing in India and WANA, which experienced the largest per capita percentage increases (almost all of it in potato).

With the exception of China and Latin America, use of R&T as animal feed is of little importance in most developing regions (Table 4). Per capita use of R&T as animal feed increased in developing countries from 19 kg in 1983 to 22 kg in 1996, and in China from 44 kg to 60 kg over the same period. Feed use levels remained high in Latin America, at 35 kg per capita in 1996. In contrast, per capita feed use dropped steeply in developed countries, from 63 kg in 1983 to 38 kg in 1996. Use of potatoes for pig feed declined sharply in Europe, particularly in Western Europe, driven by a decrease in the demand for pork (Delgado et al. 1999) and by the structural shift in the pork industry from a vast number of small, family-run farms to relatively few, large, feed-intensive operations. These farm factories typically use other, more efficient feed rations to reduce costs and capture economies of scale (Horton and Anderson 1992). Recent changes in the European Union's Common Agricultural Policy also resulted in a sharp decline in imports of cassava for feed (Henry 1998). 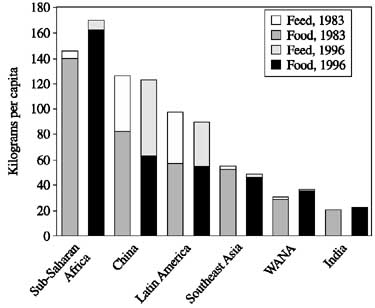 Figure 3 - Per capita food and feed consumption of roots and tubers, selected countries and regions, 1983 and 1996

The share of calories and proteins in developing-country diets coming from R&T remains modest, with the exception of Sub-Saharan Africa (Table 2; see also Horton 1988, 17). The large share in Sub-Saharan Africa reflects the high per capita consumption of R&T, the lesser importance of cereals, and the lower average number of calories per capita in that region. These aggregate figures on the calorie- and protein-shares provided by R&T should be interpreted with caution, however, as they mask within-year (seasonal) and within-region (national and subnational) variations. They also do not show R&T's contribution of dietary essentials, such as calcium, potassium, iron, and ascorbic acid, that are less available in other foods, particularly cereals.

Figure 4a - The relationship between per capita potato consumption and income

Factors Influencing Changes in Per Capita Use

In addition to per capita income, the growth rates of per capita use of R&T are influenced by a number of other measurable variables, including existing use levels, relative prices, and availability of substitutes. The growth rates are also a function of tastes, preferences, and demographic and cultural factors, but in less easily quantifiable ways. Illustrations of how some of these factors played out in the use of R&T in various countries are presented in Box 2. In the absence of more detailed statistics, such as long-term time-series data on international prices for R&T, local information can shed light on the influence of R&T prices and other agricultural commodity prices on the use of R&T.

Figure 4b - The relationship between per capita cassava consumption and income

Figure 4c - The relationship between per capita sweetpotato consumption and income

Whereas potatoes are typically considered a cheap, starchy staple in industrialized countries, they tend to be high-priced and sometimes are luxury vegetables in the developing world (Bottema et al. 1989; Scott 1988a, 1988b). As economies in Asia have developed rapidly during the last few decades and incomes have increased, consumers have increasingly diversified their diets, with additional consumption of potatoes among other foods. As a result, potato production expanded rapidly in a number of Asian countries during the 1960s and 1970s, bringing down relative prices versus cereals, an outcome that fueled additional consumption (Horton 1987).6 In other countries such as Bolivia, relative price changes made potatoes more expensive, discouraging increases in consumption (Thiele et al. 1999).

6 More recent evidence from a number of countries further substantiates this relationship between declines in relative prices (versus cereals) and increases in per capita potato consumption (Bouis and Scott 1996; Byerlee and Sain 1991; Scott 1999).

The relationship between prices and sweet-potato consumption is less clear (Horton 1989; Overbeek 1994). Whereas a decline in relative prices can spur some increase in consumption, as in the case of Peru (Collins 1989) or, more recently, Uganda (Scott et al. 1999), a major increase in supply can quickly saturate the market. Evidence from several countries including the Philippines (Cabanilla 1996), Rwanda (Tardif-Douglin 1991), and Peru (Collins 1989) suggests that consumers are much less inclined than in the case of potato to appreciably expand their consumption of sweetpotato in fresh form as a result of a decline in price. The same holds for cassava in Latin America and Asia.

Lifestyle changes, historical and cultural factors, and evolution in tastes also influence R&T consumption trends. The rapid increase in urbanization in developing countries over the last three decades, the greater participation of women in the labor force, and the pervasive exposure to advertisement of food commodities and to the eating habits of tourists and foreign residents have increased the proportion of purchased foods in total food intake. These changes in consumption patterns have affected the demand for R&T in various ways.

In much of Asia, particularly China, consumption of preferred foods, such as potato (FAO 1995b; Ye and Rozelle 1993; Zhang et al. 1999) and meat (Delgado et al. 1999) has increased, whereas the consumption of less preferred commodities, such as fresh sweetpotato, has declined (Woolfe 1992). The divergence in consumption trends among R&T crops in urban settings likely has been reinforced by the association of potatoes with Western, more modern, tastes, and of sweetpotato in fresh form with traditional, local customs, and times of hardship or food scarcity (Gitomer 1996; UPWARD 1991). The picture for cassava is more mixed. In urban Latin America - Colombia or Brazil, for example - fresh cassava is often considered a tasty and nutritious food (see, for example Janssen 1986; Lynam 1989a). In West Africa, urban consumers regard cassava in processed form as a highly preferred food. In West Africa as well, yam is a high-status, preferred food wherever it forms part of the diet, for example, in Nigeria, Ghana, and Cd’Ivoire. Some evidence suggests that yam actually retains a higher status in urban areas than do other staples (Bricas and Attaie 1998 and Nweke et al. 1994).

Cultural factors influencing consumption of R&T are both traditional and modern in nature. The rituals associated with yam in several West African countries certainly contribute to its continued place of prestige in the diets of many consumers in that region (Bricas and Attaie 1998). For potato, the explosive growth of fast food restaurants and snacks has given the commodity a new image, reinforced by advertising and promotional campaigns (Scott 1994a; Scott, Basay, and Maldonado 1997; Zhang et al. 1999). Consumers typically not only like the taste of such products but also consider their consumption fashionable and cosmopolitan as well as convenient for shorter lunch hours. But traditional images of sweetpotato, particularly in Asia, are also often associated with positive traits such as medicinal uses (Gitomer 1996). The modern quest for healthy foods has given new impetus to the consumption of sweet-potato leaves or tips in some Asian countries, including Korea and Japan, even though consumption of fresh roots has declined considerably in these countries (Woolfe 1992). Cassava's cultural recognition remains high and positive in much of rural and urban Sub-Saharan Africa. Currently, researchers are attempting to develop easier forms of preparation for cassava and yam and to improve their preservation in an effort to better cater to the tastes, preferences, and pocketbooks of the region's growing number of urban consumers (Legros et al. 1995; Westby and Graffham 1998).

The driving forces behind the trends in R&T use include different growth rates in income and population across regions and countries and the increasingly complex structure of R&T food and feed demand. The ability of R&T to lend themselves to both traditional and more modern uses has facilitated their rapid growth in food and feed use in several developing-country regions.

Given rapid population growth over the next few decades, aggregate production will have to increase substantially simply to maintain existing per capita use levels for R&T. Income increases and emerging new uses will likely raise aggregate demand for R&T still further. Other factors, such as changing tastes and preferences due to rising incomes and increasing urbanization, will stimulate additional demand for these crops. The next chapter reviews trends in the production of R&T.