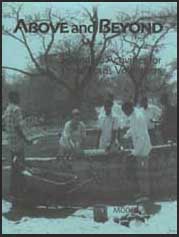 As a reflection of the Peace Corps experience, this manual is the work of many people. Besides the three of us, at least eight other people - the featured players in our success stories - can be considered co-authors: Stephanie Cox, Del Friedman, Frank Giarrizzo, Phil Bob Hellmich, Jeff Marcove, Nancy Picard, Casey Vanderbeek, and Susan Willett. Without their articles in the Peace Corps Times, or the material they provided us, we would have no Above and Beyond.

In addition, we had the advice of present and former staff in Peace Corps/Washington. An original committee from OTAPS, including Judy Braus, Drew Burnett, Angela Churchill, Barbara Ferris, Phyllis Gestrin, Mary Jo Larson, Paul Vitale and Ben Way, broached the idea of a new manual and suggested its content.

Staff from Peace Corps Partnership, Gifts-in-Kind, World Wise Schools, and Small Project Assistance made their files available to us, and once we started writing, provided editorial help. They also were the source for some of our photographs, but many others came from the Peace Corps Times, The Exchange, and the walls at Agency headquarters, decorated with Peace Corps scenes from around the world.

Our drafts were reviewed by Randy Adams, Betsy Davis, Amy Rule, Gretchen Gindlesperger, Eric Hornberger, Max Koller, Margie Legowski, Maryann Murray, Kathy Rulon, John Shores, Shelley Smith, Jamie Watts, and Alexandra Willson. The issues raised were discussed at an OTAPS forum, chaired by Joy Barrett and attended by staff from the entire Agency. We have tried as much as possible to respond to their combined judgment and incorporate their suggestions in our final draft. We hope we have succeeded.

Throughout, we've benefited from the direction of David Wolfe and the other staff at ICE - Gail Wadsworth, Vernell Womack, and Sheila Wright - and have been helped, too, by Louis Welton, who took our draft in its raw form and produced this manual.

But above all, we owe a debt of gratitude to the many Volunteers whose names we never mentioned but whose stories gave us a foundation to build on. Our thanks and appreciation to all of you.