13 Improving the Nutritional Quality of Ogi and Gari

Ogi is a blancmange-like product processed by fermenting the slurry from wet-milled maize (or sorghum or millet). Used as both a weaning food for infants and as a breakfast food by adults, ogi is one of the most important food items in Nigeria. Yet it is nutritionally inferior to maize, which is deficient in certain essential amino acids, because of the maize-milling process that is an integral part of ogi production.

Cassava, another very important food crop, has the problem of possible nutritional complications because it contains the cyanogenic glucosides linamarin and lotanstralin. Although the cyanogens in cassava are hydrolyzed to hydrogen cyanide during processing by the endogenous enzyme linamarase (1,2), not all processes are equally effective. It has even been suggested that traditional processing techniques are unlikely to remove all the cyanide from cassava (3,4).

In view of this, studies were undertaken to increase the protein content of ogi relatively inexpensively and to develop a technique for processing cassava into gari that would eliminate cyanogens from the product or reduce them to innocuous levels.

The traditional technique for processing maize into ogi is summarized in Figure 1. Also shown in Figure I is an alternative to this procedure; a 20-minute boiling step is substituted for the normal 24- to 28-hour steeping of maize prior to wet milling (5). Cowpea can be combined with maize to increase the protein content of ogi.

Substituting 20 minutes of boiling for the traditional 24 to 28 hours of steeping prior to wet milling maize reduced processing time from 72-76 hours to about 24 hours. 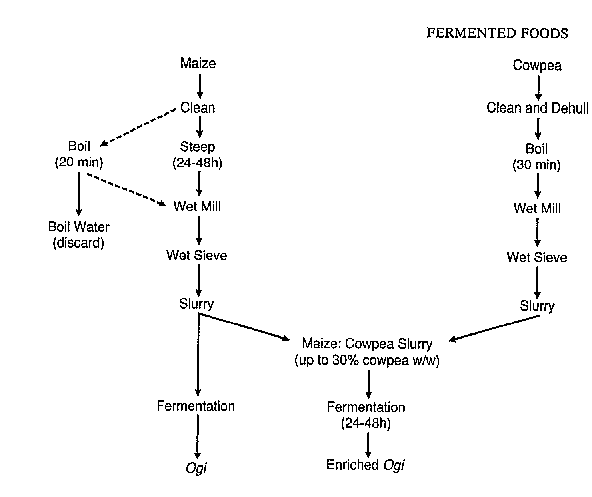 FIGURE 1 Processing of maize into ogi including cowpea protein enrichment; dotted lines show a bypass by which processing time can be reduced.

There was, however, no significant difference ( p> 0.05) in the aroma, color, taste, and overall acceptability between the products obtained by the short-time processing and traditional processing (5). The same was also true for unenriched and protein-enriched ogi except for color (6).

Two foods processed from cassava (gari and ijapu) were studied. Adding water to grated cassava at the 75 percent (v/w) level and heating at 50°C for 6 hours resulted in linamarin reduction of >99 percent (Figure 2). The pH of the mash fell from 6.4 to 6.3 during the period (7). After dewatering, the mash was adjusted to a pH below 4 by equilibrating with a 3-day fermented cassava liquor (40 percent, v/w) at 50°C for 12 to 18 hours. The equilibrated mash was then dewatered and toasted (Figure 3). A panel of tasters who were familiar with gari but otherwise untrained could not differentiate between the product and traditionally processed gari. Both sets of products were equally acceptable to the panel. 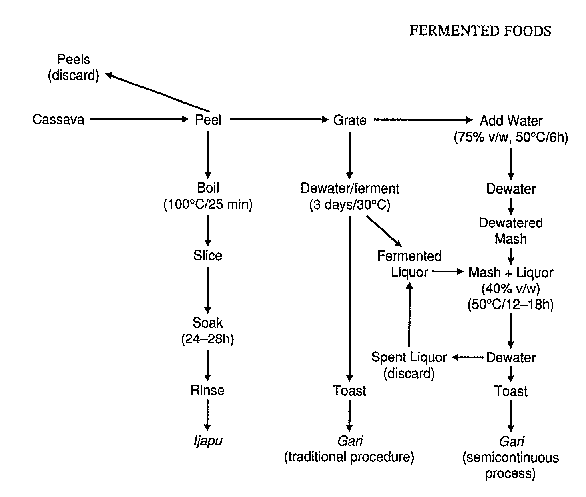 FIGURE FIGURE 3 Processing of ijapu and gari from cassava.

The modified procedure for processing cassava into gari reduced the processing time from >96 hours to about 24 hours. Cyanogens were not detectable in the product by the method of Cooke (8,9).

The study of the traditional production of ijapu (Figure 3) was intended to aid in understanding the loss of cyanogens during cassava processing. About 54 percent of the cyanogens in raw cassava were lost after boiling peeled cassava, but a substantial proportion remained in the water (Table 1). After slicing the boiled cassava and steeping the slices, a substantial proportion of the cyanogens was again lost.

TABLE 1 Cyanide Content of Cassava During Processing Into Ijapu

Much of the loss could, however, be accounted for in the steep water, and the proportion lost depended on the duration of steeping and the cassava: water ratio (Tables I and 2).

The reduction of >99 percent in the linamarin content of grated cassava within 6 hours of adding water, with little or no change in the pH of the mash, would imply that fermentation had nothing to do with the detoxication. Linamarin breakdown is essentially a hydrolytic process catalyzed by the endogenous enzyme linamarase (1,2). The results of the present study indicate that the addition of water aids in the hydrolytic process. Apparently not all of the water normally in raw cassava tuber is available for hydrolysis.

During the boiling of cassava for processing into ijapu, linamarase would be inactivated. Yet a substantial proportion of the linamarin in cassava was still lost, appearing to a large extent in the water used for boiling and for steeping (Tables 1 and 2). This would suggest that leaching could be an important factor in cyanide loss during cassava processing. This would be true not only during the boiling and steeping of cassava for ijapu production but also during the dewatering of grated cassava for gari production.

Cassava detoxication during processing is essentially an enzymic hydrolysis of cyanogens in cassava (1,2,8). Fermentation has little role

(a) Prior to slicing and soaking in water.

in this process and may even be antagonistic to it (10). Leaching is another important process for cyanogen reduction during cassava processing. Although fermentation does not aid in cassava detoxication during processing, it is important in flavor development (11,12) and preservation of the product.