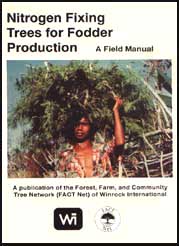 The harvested pods should be shelled and the seed dried under shade to a moisture content of 10 to 15%. This process should take 3 to 5 days. The seeds should be winnowed, screened and sorted to remove foreign objects and poor quality seeds. Only fully developed, healthy, undamaged seed should be stored. During storage, seedlots should be labeled with the species name, date of collection, collection site, number of mother trees from which the seed was collected and seed weigh. This information will maintain the identity of the seed source and make subsequent evaluation possible.

Seed should be stored in airtight, insect-proof containers at temperatures below 4Ã¸C. If possible, it should be dusted with an appropriate insecticide to minimize damage by bruchids. A sample of seed should be tested for viability before storage and again just prior to distribution. This information will enable managers to determine appropriate planting densities.