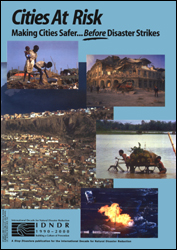 Three years earlier, in 1989, the international community agreed on a far-reaching and innovative strategy to counter the threats of natural disasters. The United Nations General Assembly proclaimed the 1990s the International Decade for Natural Disaster Reduction, and established a multisectoral Framework of Action. IDNDR's mid-term review was carried out by the World Conference on Natural Disaster Reduction, in Yokohama, Japan in May 1994. The Yokohama Strategy and Plan of Action confirm and strengthen IDNDR's objective to reduce the loss of life, property damage and socioeconomic disruption caused by natural, technological and environmental disasters.

In June this year, the international community concluded a thorough process of developing an agenda for two themes of global importance: "Adequate shelter for all" and "Sustainable human settlements in an urbanizing world." The Second United Nations Conference on Human Settlements, held in Istanbul, brought a cycle of thematic world conferences to a successful close. The Habitat Agenda is a global call for action and offers a positive vision of sustainable human settlements.

All three conferences and their plans of action are closely intertwined in their general commitment towards a safe and just world in the twenty-first century. They also have in common many areas of specific action. One of these areas is the reduction of vulnerability of people and communities at risk from the threats of nature and the earth. The protection of assets from the impacts of disasters protection of lives, knowledge and skills, property, financial assets, means of production and infrastructure is an indispensable part of national plans and strategies for sustainable development.

This publication highlights the threat from natural, environmental and technological hazards in an area of rising concern - urban settlements and cities of the future. It demonstrates even more amply our potential to combat these threats effectively.

To foster sustained economic growth, social development, environmental protection and social justice in fulfilment of commitments made on international cooperation for development, Member States declared that they will: "intensify cooperation on natural disaster reduction and major technological and man-made disasters, disaster relief, post-disaster rehabilitation and humanitarian assistance in order to enhance the capabilities of affected countries to cope with such situations."

For "Cities at Risk," action must not be delayed.