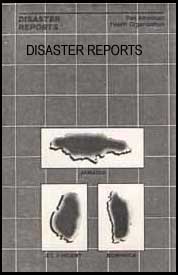 Disaster Reports is a publication of the Emergency Preparedness and Disaster Relief Coordination Program of the Pan American Health Organization, Regional Office of the World Health Organization of the Americas. The reported events, activities and programs do not imply endorsement by PAHO/ WHO, nor do the statements made necessarily represent the policy of the Organization. The publication of this Report has been made possible trough financial support of the Canadian International Development Agency (CIDA).

The designations employed and the presentation of the material in this publication do not imply the expression of any opinion whatsoever on the part of the Secretariat of the Pan American Health Organization concerning the legal status of any country ,territory, city, or area of its authories, or concerning the delimitation of its frontiers or boundaries.

The mention of specific companies or of certain manufactures' products does not imply that they are endorsed or recommended by the Pan American Health Organization in preference of others of a similar nature that are not mentioned.

Report on Disasters and Emergency Preparedness for Number 2 Jamaica, St. Vincent, and Dominica

This publication attempts to summarize some recent thinking about a little explored field of infectious diseases epidemiology, to describe practical experiences related to this field and to put forward some general ideas about how to control infectious diseases following natural disasters, based on both the theoretical framework and the practical experiences. It Is based on a thesis presented by the author at the Catholic University of Louvain School of Public Health, in January 1983 (Promotor, Prof. Dr. H. van de Voorde).

This work would not have been possible without the collaboration in the field under, sometimes, very difficult conditions of some of the moat dedicated persons in the field of public health I have seen in the Caribbean-the public health nurses. In particular I am grateful to V. Bowman (St. Vincent), E. Brown (Jamaica), and J. Jacobs (Dominica) who actually operated the surveillance systems, and to the medical officers who provided the data. In the Ministries of Health cooperation was very close with Dr. C. Mulraine (St. Vincent), Dr. A. Dyer (Jamaica), Dr. L. Charles and Mr. R. Fortune (Dominica). My first initiation to disaster epidemiology came from Prof. M. F. Lechat (U. C. Louvain-Belgium) and was continued by Dr. C. de Ville (PAHO/WHO-Washington). While at CAREC, I received stimulating intellectual challenge and exchanges from Drs. Peter Diggory and Patrick Hamilton, and from Drs. M. West and N. Arnt with whom I shared several of these experiences. Most of the writing was finally done in Suriname where I received both moral and administrative support from the PAHO Office (Dr. G. A. Mora end Mrs. D. L. Wong). I gratefully acknowledge the permission to analyze the data and prepare this publication I received from the Pan American Health Organization in whose service I was when these data were collected and in whose service I still am at the date of their publication.

In 1979 the Caribbean was struck by three consecutive disasters. In April the Soufriere Volcano in St. Vincent erupted, forcing the authorities to temporarily resettle 20% of the population of the island to the already densely populated south. In July, floods caused extensive damage to the western parishes in Jamaica. In September, Dominica was left in A state of shock and complete destruction by Hurricane David, one of the most powerful hurricanes of this century.

In all these disasters the immediate aftermath was characterized by uncertainty and fear of communicable disease outbreaks. In recent years the relationship between disasters and communicable disease outbreaks has been investigated several times. Little association was found to exist. In order to monitor closely what occurs following mayor disasters, specific post-disaster epidemiologic surveillance systems have been proposed.

This report describes the experiences with setting up such surveillance systems in the Caribbean following the disasters in St. Vincent, Jamaica and Dominica. A similar system was used, with variable degrees of success, in all three countries. The system was essentially based on the use of simple and sensitive infectious disease indicators through symptom-monitoring and the rapid investigation of reported outbreaks.

Several variations were introduced to accommodate the different circumstances that existed after each disaster and the surveillance systems were continued for 30 to 60 days after the disaster.

No massive outbreaks were detected during the period these surveillance systems were in operation. Several small focal outbreaks were recognized, however, and a potential for larger outbreaks was noted if these were not properly controlled. These included two food-borne outbreaks in St. Vincent and amebiasis cases among expatriate disaster relief personnel in Dominica. Most of these outbreaks or potential risk situations were associated with the disaster relief effort.

The report ends with a number of conclusions and practical recommendations for future work in setting up epidemiologic surveillance systems following natural disasters. A summary of these follows.

1. Epidemiologic surveillance systems following disasters should be organized quickly and be creative and very dynamic. The simple fact of having a system, even when it coca not collect all the data one would like, makes an easy flow of information possible for whomever has something to report.

Regarding the overall usefulness of epidemiologic surveillance systems following natural disasters, the author states that to have the system la not enough. If outbreaks are to be prevented, the authorities who requested that the system be established must be willing to act on the information it provides.