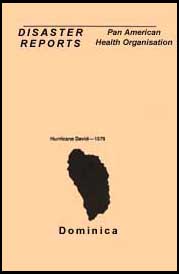 Dominica, the most northerly of the Windward islands, flea approximately 15°N and 61°W and forms part of the chain of the Lesser Antilles. It is extremely rugged and although the total land area la only about 800 square km the peaks of the central mountains rise to between 1,200 and 1,500 m. Tropical temperatures and high rainfall result in much of the interior being forested. The population is predominantly rural and agricultural. Densities are not high compared with West Indian standards, the largest concentration of population being in Roseau, the capital on the vest coast.

CYCLONES IN THE CARIBBEAN REGION

She Caribbean is hurricane-prone. The West Indies have already experienced some thirty-eight hurricanes in the twentieth century, although, because of the comparative narrowness of the path of a cyclone, individual islands suffer damage relatively infrequently. The hurricane season, begins in August and lasts until October; September being the month with the most severe storms. The hurricane tracks travel across the Caribbean and its islands in a north westerly direction swinging round eastward to the North American coast. Most hurricane damage is due to the wind, to the accompanying rain or, in low-lying coastal areas, to sea surge.

On 29th August 1979, Dominica was struck by a hurricane, code named "David." Winds --which at times exceeded 250 km per hour-- swept the island from 11 a.m. to about 5 p.m. The whole island suffered and was declared a disaster zone by the government. Over forty people died ; roughly 3,000 were treated for injuries. The majority of the houses were damaged and most of the main crop --bananas--was reported destroyed. Roads were impossible, utilities put out of action and many public buildings demolished.